This year there were two papers that received the maximum possible overall score from reviewers, and strong positive recommendations from their meta-reviewers.  On that basis, the award goes jointly to:

As well as the above awards, we would like to make special mention of this paper, for its call to action on the scope of international research:

Also known as the “Fool’s Award,” after the Tarot card “the Fool,” symbolizing the willingness to take risks and venture into the unknown with the possibility of achieving great things, the John Henry Award is given to the paper that, in the judgment of the conference delegates, attempts a task that may seem impossible.

The John Henry Award is given by the attendees of the conference. In fairness to parallel and late sessions gathered votes in the post-conference survey, after attendees had time to consider all of the papers. The poll was open for a week following the conference. Of the twenty seven research papers published at the conference, sixteen received votes. This following paper remerged as a clear winner, receiving twice as many votes as the next highest paper: 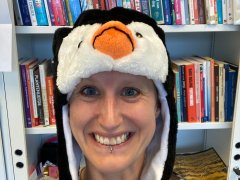